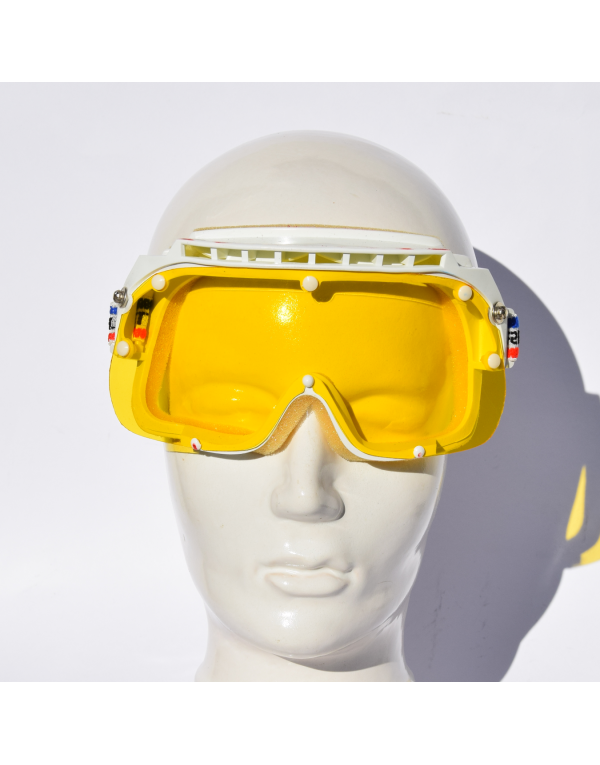 This very scarce pair of Solar "Guy Perillat" antique goggles are brand new and come with a second snap-on dark shield. They would look very nice to enhance your displayed vintage skis or to use at your next Vintage Ski Party. Made in France with the original box.

In 1960 Guy Périllat won a bronze medal in the Olympic downhill at Squaw Valley, adding a World Championship gold medal in the combined, which was not then an Olympic event. His greatest year was probably 1961. In the era before World Cups, Périllat won all the classic downhill races – Wengen, Kitzbühel, Megève, Chamonix, and Saint Moritz. His victories at Wengen and Kitzbühel made him only the third skiier to accomplish that double in the same year, after Toni Sailer (1956-57) and Christian Pravda (1954). His other major victories included slaloms at Wengen in 1963 and 1965-66, and the combined in 1963; the combined at Kitzbühel in 1969; and slaloms at Megève in 1960, 1963, and 1967, with a combined victory at Megève in 1960.

Périllat won a silver medal in the slalom at the 1962 Worlds in Chamonix, while at the 1966 World Championships in Portillo, Chile, he won the giant slalom and garnered another silver in the slalom. Between those two major events, Périllat struggled at the 1964 Winter Olympics in Innsbruck, with his best finish a sixth-place in the downhill. But he returned in 1968 to win a second Olympic medal, a silver in the downhill. The World Cup started only late in his career, but he managed two victories in slalom events, and seven podium finishes. He was second in the seasonal World Cup standings in both downhill and slalom in 1966-67. Périllat was an eight-time French champion, winning the slalom in 1962, 1966 and 1967; the downhill in 1967; giant slalom in 1962 and 1966; and the combined in 1966-67.