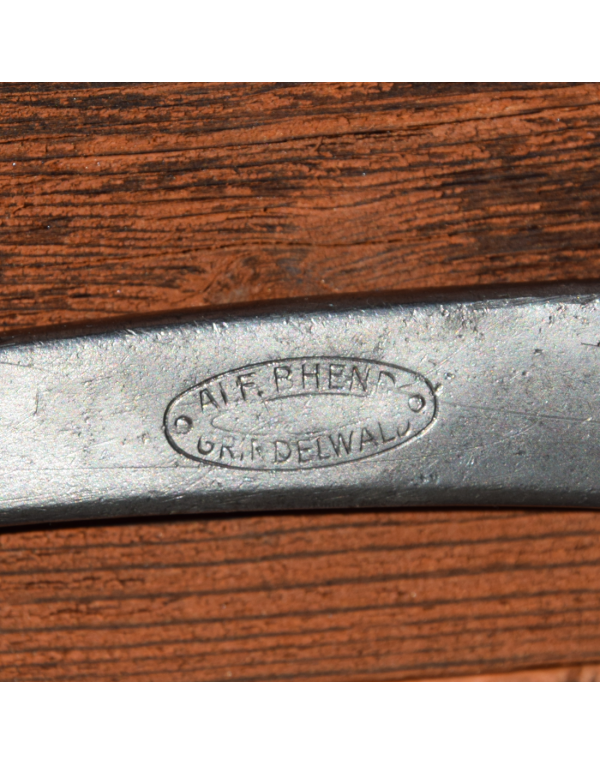 This very scarce ca. 1920's antique ice axe was made by the legendary ice axe maker Alfred Bhend (second generation). The Bhend ice axe tradition spans over 150 years, with the craft passing down through 4 generations, today known as Bhend Metallblau, with Ruedi Bhend, nearly seventy years old, still making ice axes every winter. This particular axe is in very good condition, clean with no signs of rust. The ash handle is is well worn, with a few splinters of wood missing at the attachment of the head. All in all, a great display item. When you hold a Bhend ice axe in your hands, you hold a piece of climbing history!

Bhend ice axes earned their first great success in 1938, when German climbers Anderl Heckmair and Ludwig Vorg, and Austrian climbers Heinrich Harrer and Fritz Kasparek, completed the first ascent of the North Face of the Eiger, a climb which repelled numerous other parties, and lead to several widely-reported tragedies, including the deaths of German climbers Max Sedlmayr and Karl Mehringer, in 1935, who froze during a storm, and the death of German climber Toni Kurz, in 1936, who hung lifeless on a rope before the eyes of would-be rescuers. These tragedies contributed to the myth of the Eiger, which became known as the Morwand, or Wall of Death, a play on the common name, Norwand, or north face.

Following World War Two, the British Everest expedition, lead by Colonel John Hunt, contracted with Alfred to supply crampons, ice axes and ice hammers, and New Zealand climber Edmund Hillary, and Nepalese climber Tenzing Norgay, carried Bhend ice axes on the first ascent of Everest, in 1953. A photograph taken by Hillary shows Norgay standing on the summit, cloaked in an insulated jacket and overboots, holding a Bhend ice axe triumphantly over his head. Bhend ice axes were also used by the Swiss expedition of 1956, lead by Dolf Reist, which succeeded in making the second and third ascents of Everest, and the first ascent of Lhotse.